Today I decided to finally face the Box of Things.

Yep. The Box of Things that arrived (by courier, sealed, important font stating everything had been ‘safely sanitised’) all those months ago. The Box of Things had been acting as a small table in my small flat. Left (put?) by the door, it meant the door couldn’t be opened fully. And I never noticed this much until lately, what with going out a bit more. It was when I heard myself huffing as the door would hit the box on my way out, on my way in; hearing things shift inside it. Things. I heard something yesterday, when I got back. It was a clink...or maybe a chunky thunk. And I knew what it was. That chunky thunk echoed right in my chest, right there, as I was stood with my hand still on the key, still in the door.

I must’ve stood there for two minutes or something. Bag of apples in the other hand, weighing it up. I almost, almost, stepped backwards, pulled the door shut again, retraced my steps like a crazy rewinding tape: if I just go back, I told myself. If I just keep going back.

It’ll be ok. It’ll be winter and Sunday lunch and a hug before leaving. If I just go back. If I could just go back.

But the Box of Things.

So I go in. I lean against the wall, drop the apples, hold my eyes shut for the longest time, feel myself go cold, cold, cold. The thumping in my head, the thumping in my chest, is making it hard for me to breathe so I slide down the wall like they do in the movies when Bad News has been received and I am a crumpled packet of nothing, I am a broken cup. The Box of Things. It’s time.

There’s not much. I knew there wouldn’t be. She didn’t like clutter, never held on to much. ‘Everything I need is you’.

- The silk scarf I bought her when I got my first paycheck - frayed, a smear of bleach.

- Eight photographs of us; in each one I get bigger. In each one she gets smaller.

- The gold necklace I would beg to wear when I was tiny: the coin of her country coupled forever with a cross. I never once saw her without it.

But these few things are not unexpected; they don’t hurt.

The old mixing bowl, like a half melon I hold carefully; each hairline crackle in the glaze; the three chips we made together in as many decades; the depth of it, the wound I feel as I sat there on the floor in my hall in my tiny flat and the walls bow and weigh as I cry I cry I cry and tears fall in its womb I cradle, hug to me. I fill the bowl with every piece of me, every shattered splinter, every tiny mosaic fragment, every kiss goodnight, every furious shout, every slip and touch and I am held in that squashed hallway; tumbling into crumbs, pastry, flour in my hair. I cling to that bowl, the Box of Things impassive with its air let out now and I kick it away and see apples rolling and I think I might have screamed, sore throated, dry eventually.

I woke up in that same spot. I don’t know how long I’d been there; maybe only a half hour? But the bowl still in my arms, on my belly and I was hungry; starving in fact. Like I hadn’t eaten in days, which I guess was half true because food had lost its joy (I can now admit). 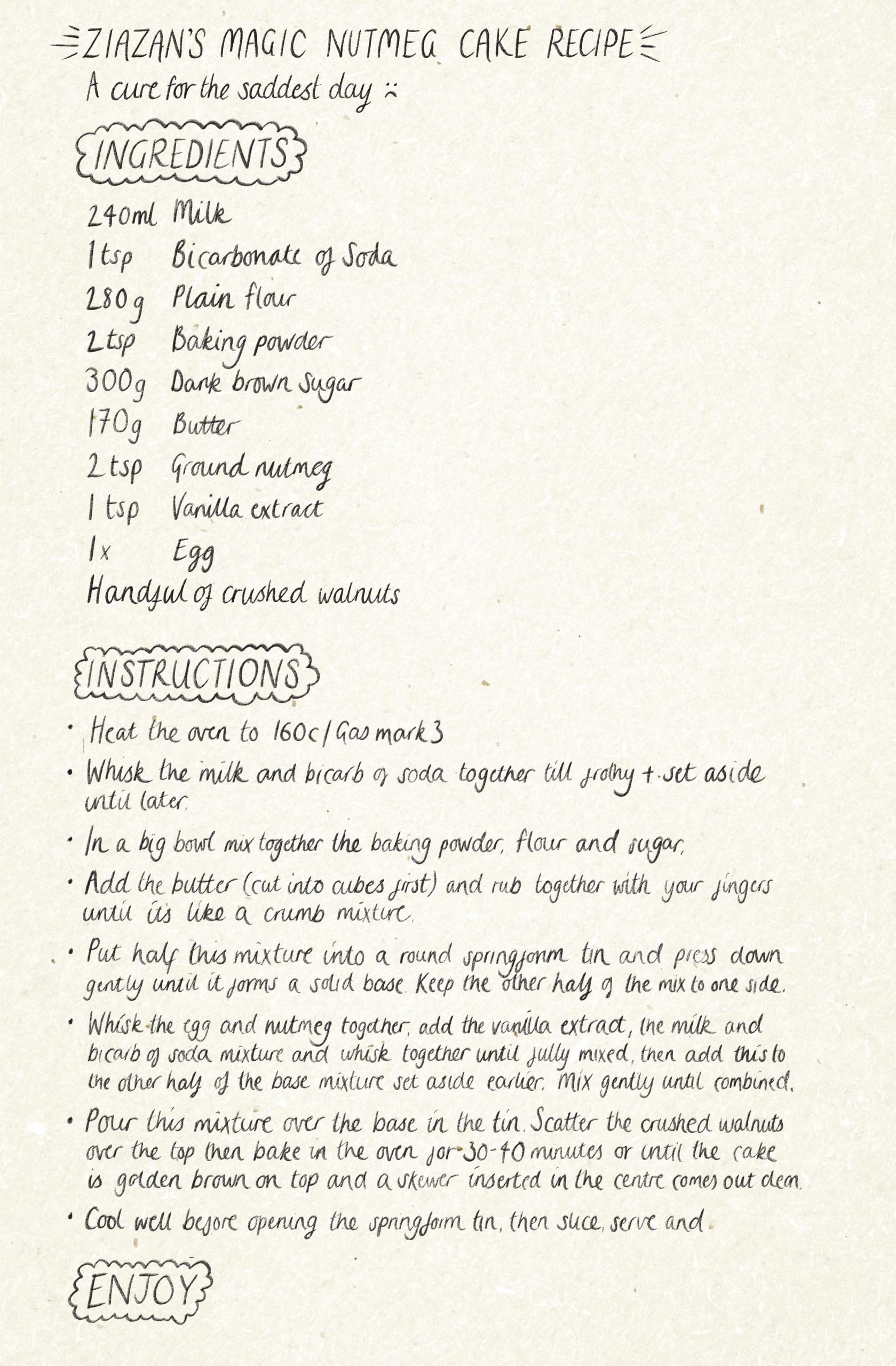 So I decided to bake.
Course, using the old recipe I end up with a giant cake. Two slices and I’m done for. I go to bed, exhausted, and for the first time in ages I dream of her, but this time it’s not the horrible things; the endings. No, this time we’re just walking; no words. We walk side by side and I’m sure it’s only a moment in a REM cycle, but when I wake up there are crumbs in the bed and my pillow smells of nutmeg.